The history of Livingston Football Club is one of the most tumultuous in all of Scottish football.

The club began its life in 1943, as the works team of Ferranti, who had set up a factory at Crewe Toll, Edinburgh for the manufacturing of gyro gunsights for Spitfire aircraft during the Second World War. The original club name was Ferranti Thistle FC. They played under that name until 1974, when the club gained admittance into the Scottish Football League.

Because their home ground, the former City Park, did not meet the SFL’s requirements, and because of controversy arising from a team bearing the name of a commercial company, Ferranti Thistle moved to the Commonwealth Stadium (later called Meadowbank) and changed their name to Meadowbank Thistle FC. The team struggled in the lower divisions for many years and in 1995, they relocated to Livingston, changing their name to Livingston FC in the process.

After this move to West Lothian, Livingston FC began to show promise. By 2001, the club had gained promotion into the top tier and in this first campaign, the Livi finished third in the table, which meant that they qualified for the UEFA Cup (now the Europa League). Livingston would meet further success when they defeated Hibernian in the final of the 2003/04 Scottish League Cup on 14 March 2004. But Livingston’s victory was bittersweet, as the club had entered administration on 3 February, eventually emerging in May 2005. That same month, Livingston avoided relegation narrowly. Ultimately, their stay in the top tier was ended when they finished the 2005/06 season at the bottom of the table.

In 2009, Livingston entered into administration for a second time and were in danger of outright liquidation. As a result of breaching rules on insolvency, the SFL took the decision to demote Livingston to the Third Division (the bottom tier). In the two subsequent seasons, Livingston won consecutive promotions, reaching the First Division in 2011.

In 2013, the SFL was replaced by the Scottish Professional Football League, and the First Division was renamed the Scottish Championship. At the end of the 2015/16 season, Livingston were relegated to League One (the third tier). But their stay in League One lasted only one season, with the club gaining promotion back to the Championship in 2017. In the 2017/18 season, Livingston secured second place in the Championship table. This gave them the opportunity to gain promotion to the top tier for the first time since 2006 via playoff, which they achieved in a 3-1 victory over Partick Thistle over two legs.

When redesigning Livingston’s badge and kit, I kept this challenging history very much in my mind. Because of the abundance of thistles among Scottish football club badges, I opted to omit the thistle image from the new badge (and save it for clubs with ‘thistle’ in their names, like Partick Thistle and Inverness Caledonian Thistle).

Being that the club has been based in Livingston since 1995, I wanted to capitalise on that local identity. The acorns represent West Lothian (whose coat of arms features an ‘oak tree fructed’) and the three cinqfoils are taken from the Livingston family coat of arms. The crossed pickaxes represent Livingston’s historical shale mining industry.

The Latin in the outer ring, Fortiter Omnia Vincit (‘Bravely Conquers All’) is the club motto, which was included in the club’s badge from 1995 until 1999. I feel this motto is especially appropriate given Livingston’s unlikely survival over the years. The lion rampant has featured in the Livingston badge since 1999 and I believe it is fitting for a Scottish club and accompanying the motto above. 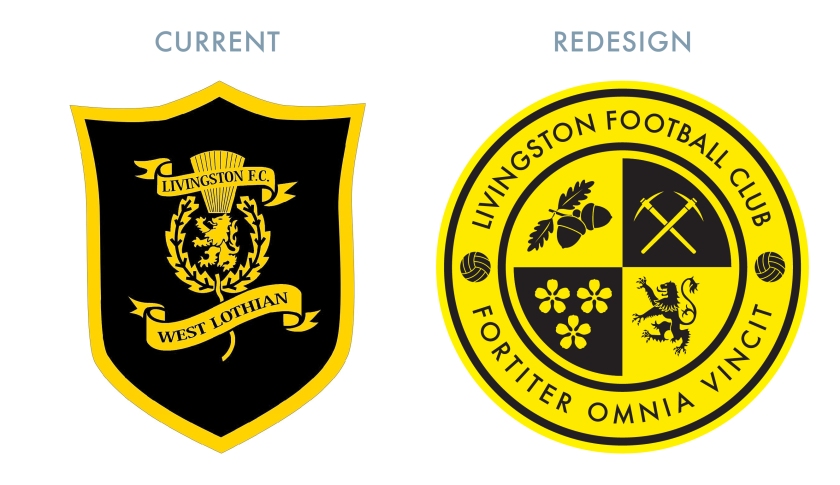 For the home kit, I went with a black body and gold details, a colour scheme used numerous times since the club’s 1995 move. The away strip is more adventurous, calling back to the Ferranti works team who manufactured gyro gunsights for Spitfire. The scheme is based on the Types A.1 and C.1 roundels used on Spitfires during the Second World War. 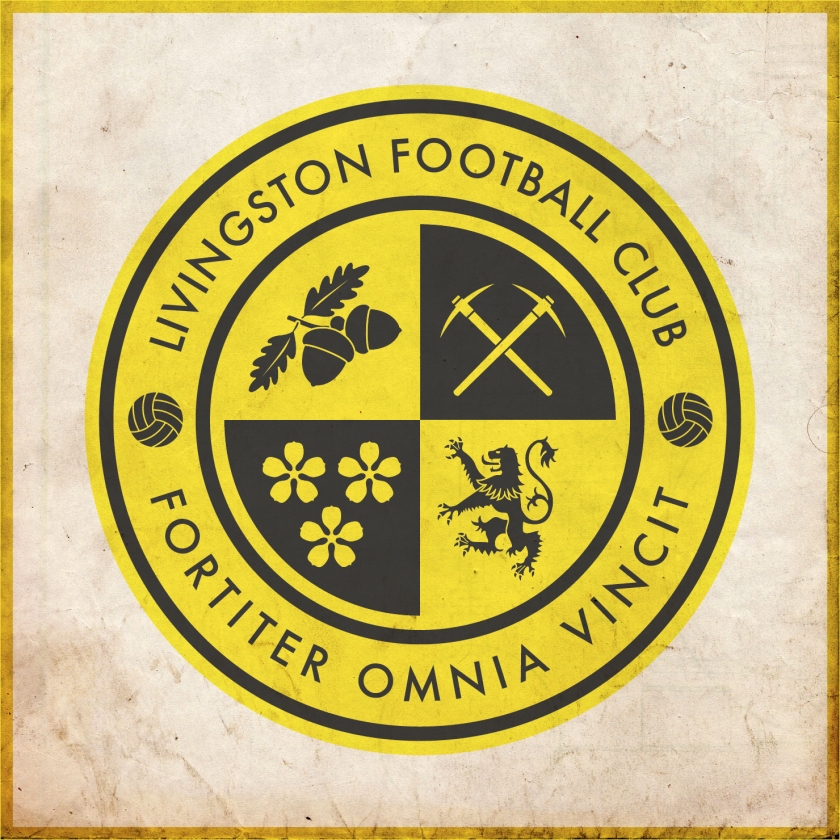