Formartine United Football Club was established in the village of Pitmedden, Aberdeenshire, in 1948. The exact circumstances of the club’s formation are something of a mystery. It is known that an amateur club, Pitmedden FC, played in the village prior to the founding of United, but the relationship between the two is unclear.

Formartine United played in the amateur league in Aberdeenshire until 1960, when they became a junior side. They continued to compete as a junior side for the nearly 50 years until, in 2008, the Highland Football League was expanded, opening three new places. These places went to Strathspey Thistle, Turriff United and Formartine United. By the end of the 2012/13 season, Formartine United had reached second-top in the Highland League table. That same season, the club secured their first senior honour, winning the Aberdeenshire Cup. United repeated their Aberdeenshire Cup victory in the 2017/18 season, a campaign during which they also won their first Highland League Cup.

When looking at the current badge, we notice a red-and-white-striped shield upon which is found a golden griffin rampant. A golden banner wraps around the badge and includes the club name and the French motto SANS PEUR, ‘without fear’. The stripes on the shield echo the traditional red and white stripes of Formartine United home shirts. The French motto, that of Clan Sutherland, might have some connection to the club’s founding (perhaps one of the early movers in the club was called Sutherland). Given that United are based in Pitmedden, I decided to make greater use of the club’s locality. I omitted the French motto from this badge redesign (and included it in the redesign of Brora Rangers‘ badge) as Formartine is far from the traditional homelands of Clan Sutherland. The griffin has been replaced by a version of the Clan Seton coat of arms. This ties to the historic Pitmedden Gardens, which feature the coat of arms of Sir Alexander Seton, Lord Pitmedden (c. 1639-1719).

The home strip makes use of the traditional Formartine United red and white stripes, while the away strip inverts this colour scheme and replaces red with dark blue. 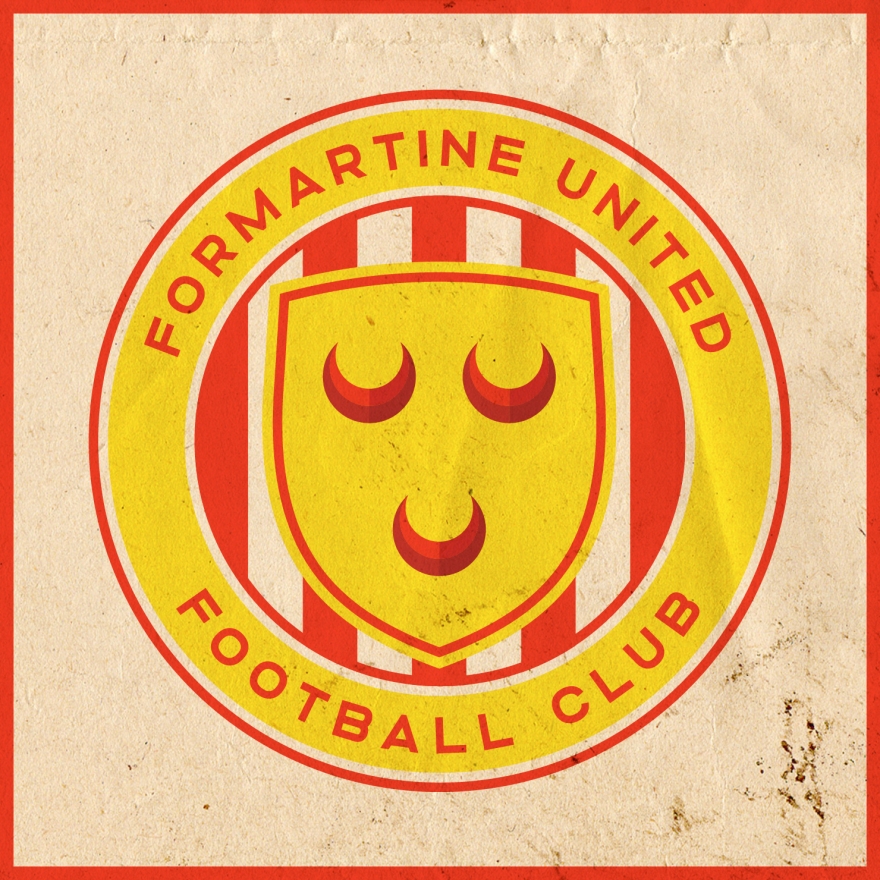